This incredible lamp was a graduation gift by my amazing friend, Wendy Costa!  Its huge and fantastic in person, and has a wonderfully kitschy fairy princess ballerina girl with horns!! (look close).  The shades are stunning, and I can easily say this is my best lamp, ever!!  I still can't really believe its mine.... 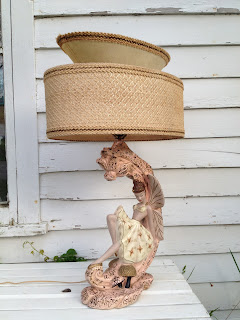 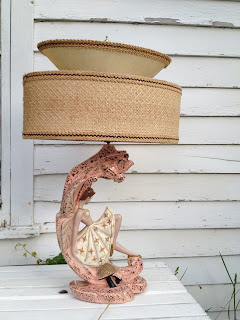 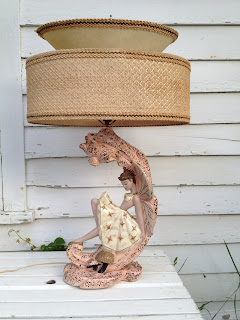 Actually, the only thing better than one of these lamps.... 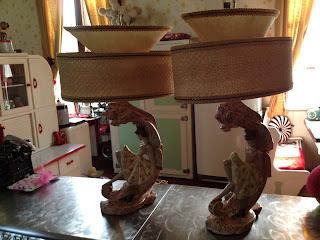 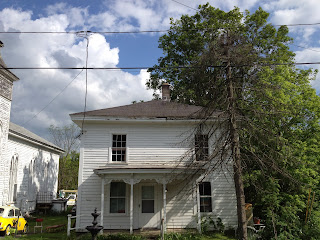 Just pulled into home!  I'm not officially moved yet- this is just the first of many moving trips, but its still very exciting!!!  Can't wait to make it mine :)

And they said I'd never pick up chicks....

When I came out to my mother years ago, among the drama and craziness was her worries over the fact that she wouldn't get grandkids.  While I'm still not so much a kid person (at least having my own- sorry mom), at least now she'll have grandchickens!!

I just picked up these little cuties yesterday!  They're all a week old except for the little guy who's only a couple days :).  They're silkies, which are a really odd and utterly fabulous breed of chickens.  They're not the best egg layers, but who needs to lay eggs when you look like that?  They'll pay for their keep by just struttin' their stuff.  A few other bigger girls (well, they will be bigger) are coming in the mail next week.  They'll pick up the egg layin' slack for the little silkies (which will be half their size).  Anyways, enough talk, here are the girls!!!! 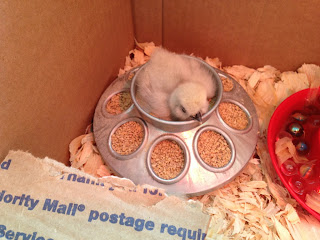 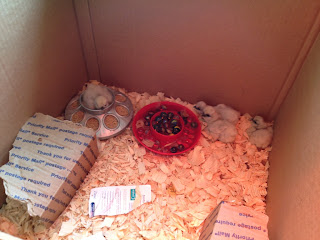 What they will look like:  (although this is a white, where mine will have more touches of grey/blue 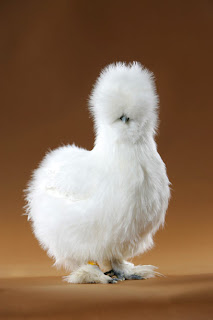 And on a side note that's actually quite big, I just GRADUATED today!!!!  WooHOOOO!!!  I never thought I'd spend my last day of education rubbing vasolene on a chicken butt trying to get it to poo....
Posted by Decades a Go-Go at 5:51 PM 7 comments:

Here's some pictures of the kitchen from winter break. The before! I've done nothing to the space in these photos. The vintage 1940's linoleum floor was unfortunately too far gone to be saved. And actually, while currently the kitchen, this is actually going to become the office and the kitchen will be moved to a bigger more light filled room in the house.   This room is adorable, but so small for a kitchen!  Only 9 ft wide!  The other room has south facing windows for morning sun, and is much bigger, and at the heart of the house (not a tucked away little corner like it is now).  The sink is nice, but will be replaced with a 1930's mint green farmhouse sink.  The stove I have to think about...its PINK, which I LOVE, but I have to see if it goes with the kitchen colors in the end.  I have another 1950's stove competing for the spot, that is white but super cartoony with great sentimental value..

What are your thoughts on the wallpaper?  I'm not going to be keeping all of it, but I was thinking of keeping one wall, maybe as a kitschy accent.  I believe its from the 1940's... 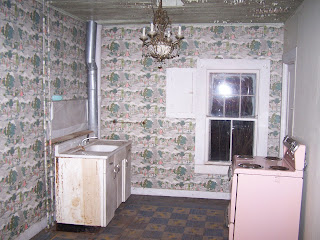 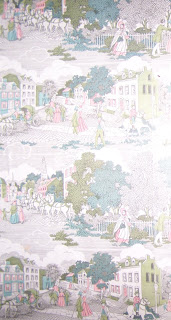 After some initial ceiling scraping...don't worry, I wore a mask and sprayed everything to keep the dust down (lead paint). 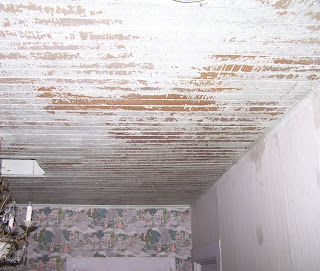 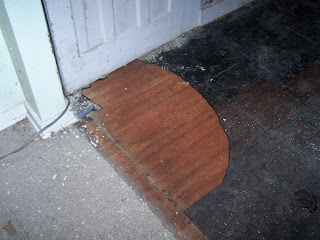 P.S. sorry for the bad pics- it was night and my camera was acting up..
Posted by Decades a Go-Go at 9:37 AM 5 comments:

Treat for Myself: Vintage Door Hardware!

Now that I'm graduating from the University of MD next week (woo!!), I must admit I've been taking full advantage of the whole "I just finished 4 years of college- I deserve a little somethin' somethin'!" thing. I think I know deep down this will only last another week or so before the guilt sets in.  After all, I have MANY more things that truly need the money.  But in true Nick-style, I've justified spending a little more than I normally would to get something I don't really "need", but really want! 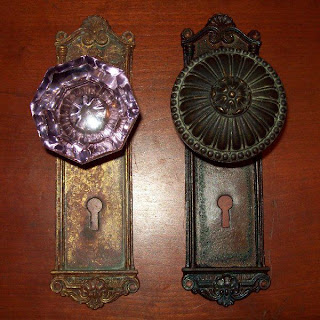 I don't really have a good picture of the front door, but its actually very nice, although hidden behind an awful modern screen door that HAS ta go! You can sort of see it in the pic below..  The hardware was replaced with really cheap home depot brass stuff, that totally kills the look of the door! Since its gonna be something I use every day, I decided to splurge and get more appropriate "house jewelry"! I am a detail freak, so I also will be getting vintage hinges to replace the modern ones, and the wonderful woman who sold me the set is provided vintage screws that match the patina of each side.
*note that you should use a historically correct slotted screw, NOT a modern phillips head screw on an antique doorplate, and always hand screw after pre-drilling). 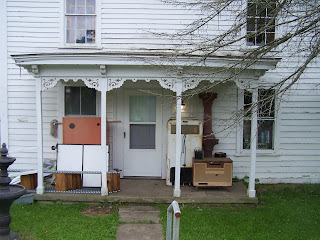 Speaking of patina, that's one of the things that makes this set so special.  Because one side has been exposed to the elements for 100 years, they've aged very differently, and I love it!  I also love that the interior will be a glass knob, with very different almost black exterior hardware. 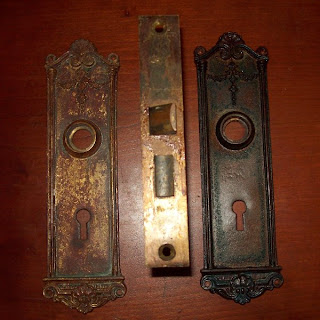 This isn't the best picture of the knobs, but interestingly the lavender knob (appears darker here) became that way due to sun exposure- it started clear.  That dates it between 1890 - 1914.  The other knob was manufactured by Sargent & Co. around 1905.  It's the pattern "bullis" from their Greek school of architecture patterns.  The door plates (pattern "quincy") were manufactured around 1905 by the Reading Hardware Co.   (p.s.- credit goes to Vicky at Historic Home Hardware for assembling this phenomenal set and knowing the history!) 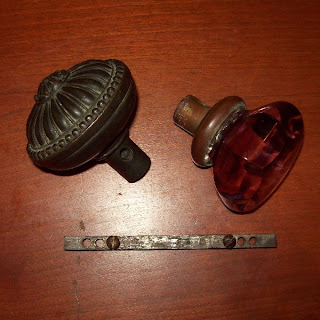 Everything is complete and freshly cleaned and oiled, and works great with a skeleton key! 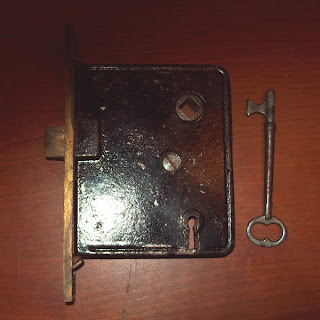 Also, just to note, this isn't technically "era correct" to my house which is an 1865 Greek Revival, but my motto is if the original is long gone, then I'll go with something old that I like!

I'll keep you guys posted as the door project goes on...Its not quite as simple as it seems, since I have to fill in the larger whole left from the home depot hardware, get proper hinges, and make repairs to the door such as somehow removing a huge sheet of plywood that was bizarrely glued onto the back of the door (to better insulate it I presume?).

So like everything in my life, its not simple, but thats what makes it fun!

I didn't think I could top myself with the recent sink, but these iron chairs are incredible!! I feel like I'm on a roll now that school is ending! Now I haven't actually bought them yet, but I've talked the seller down to a price I can afford, and am getting ready to send a deposit!  (I can't pick them up for a week or 2).  The seller doesn't know exactly how old they are, but he believes they may be from the 70's.  I'll have to try and judge the age when I see them in person...all I know is if they're half as good as they look in the pics, I think I'll be beyond thrilled....  I'm actually thinking I might end up using them as the breakfast area chairs in the kitchen...  I can't wait to start designing around them in the space!  I'll have to find a table thats worthy of them... It'll actually be an interesting challenge....normally chairs play somewhat the part of backup dancers in design, but lets face it, these girls are divas.  To be honest, I can't possibly imagine how they can be comfortable, but in the end, I think of a quote from one of my favorite movies, "To Wong Foo, Thanks for Everything"...

"Well pumpkins, it looks like it comes down to that age old decison.....Style..or Substance? 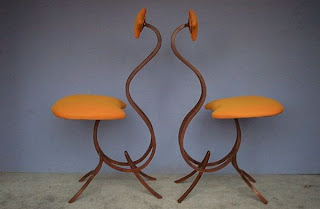 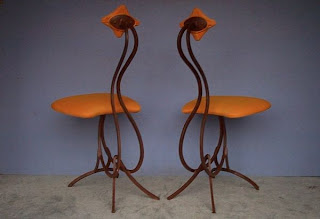 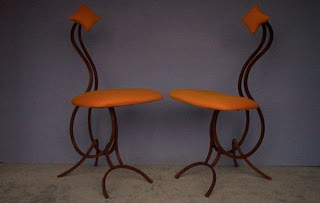 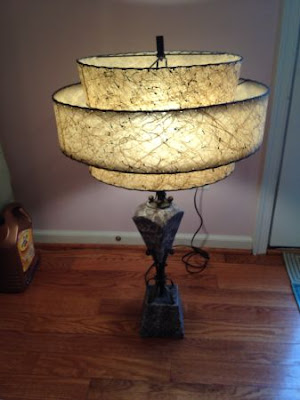 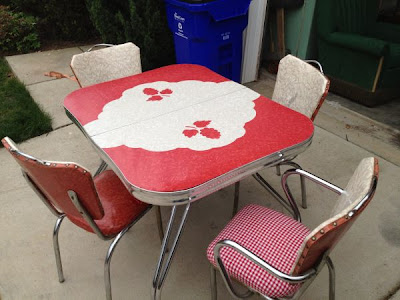 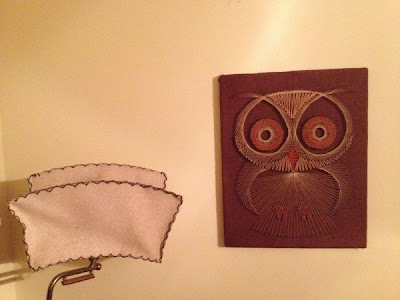 I don't have time for a long post, but I figured I'd give everyone a heads up that I'm gonna be sellin' a bunch of stuff before I move this summer! I've already posted and sold a bunch of stuff on craigslist, but still have a lot up (and a lot more to come up). To get it all, type in "laurel bun bun roo" into the DC craigslist search bar.
Or copy and paste this:

http://washingtondc.craigslist.org/search/?areaID=10&subAreaID=&query=laurel+bun+bun+roo&catAbb=sss
And don't worry, if you think something is too high priced, it will come down. I don't like things sitting, so if I'm not getting any bites I will relist and reprice until its gone! Also, feel free to make an offer on anything!
Posted by Decades a Go-Go at 5:04 AM 3 comments: