If you own vintage stuff, or heck, ever get stuff that's just a pain to get clean, you have to get Mr. Clean magic erasers! I'm not sure if product shout-outs is anti-blog etiquette, but this has to be an exception! If you've never tried it before you must! I get a lot of vintage stuff, often plastic, which has stains and deep grime/wear that never seems to come out! Someone recommend the magic erasers to me, and I fell in love! You just sit there scrubbin', and it's like magic! I mean you do have to scrub, but almost anything will come out! Marker, grime, build up...the list goes on!

I will go on to say my experience has been mostly on plastics and some furniture, but it's worked good on everything so far! I will say do not use it on any metal painted surface, or -especially-easy-to-forget- on decals that may be on vintage plastic things. Mr. Clean will clean...right through them! As I discovered in a fluster early on while scrubbing a decal on the front of a vintage-ish (thankfully not precious) blender.

My TV recently had some alone time with Mr. Clean, and the results were awesome! Note the "before" was AFTER going over the entire TV with a wet rag. The after is only that one part, but just look at the difference! Like a breath of fresh air... 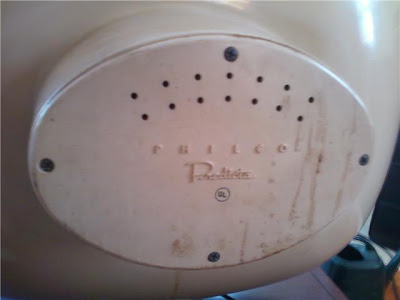 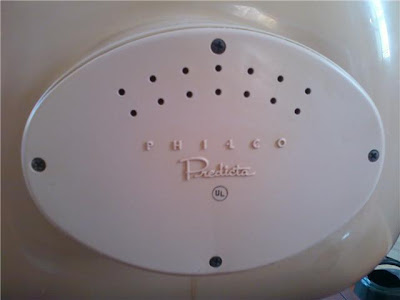 So yea, I'm doin' a bit of product placement, but I promise it's worth it! And to start your morning off with a contagious jingle that won't get out of your head, here's the original 1958 Mr. Clean commerical!
(I love it, though I'm not sure I'd Mr. Clean my dog...!)

Yayy! It's basically done! I may change or add stuff over time, but the foundation of the living room is now in place!
And yes, yes I know I was supposed to post this yesterday evening, but well, I just had too much to do...

But hopefully the unveil is worth the wait! The pictures are a combination of phone and camera pics, and in some of the brighter clearer ones the color is a bit distorted. But you get the idea!

So to start off, here's my new light fixture! 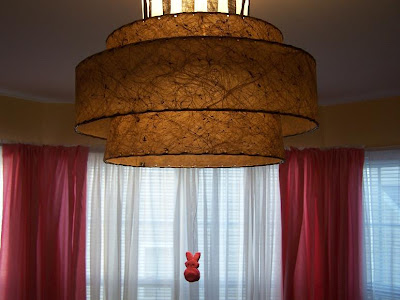 I got the shade off a lamp I wasn't using, and the peep from well, my stash of peeps! The pink actually brings the color to the middle of the room, and besides that, well, I just love peeps! To be honest, I couldn't remove the ugly light fixture above without completely re-wiring it, so I kind of just hung some fabric around it for now ha! 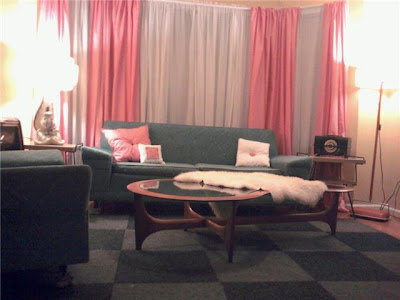 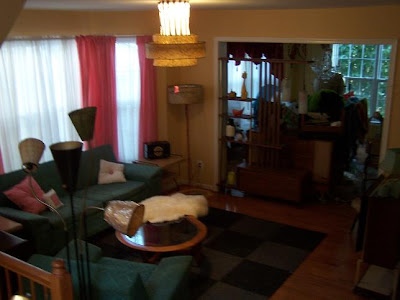 The pictures above kind of give a sense of the layout. Try not to look past the divider- the dining room is a mixture of chaos and storage as I tackle a couple other rooms downstairs!
And here's Chairy! Notice anything different? No nastyy brown stains or anything in front! Both the sofa and chair came out great! They're not perfect, but I kind of like that. Gives em' the kind of character you can only get after 50-some years! 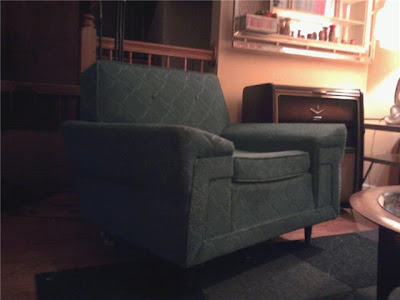 The color below is a bit too bright, and I know I need to clean the mirror, but here's my 2nd favorite shadow-box! My over-the-top atomic baby wouldn't fit anywhere in this room, so she'll probably be used next room over in the dining room... but I still love #2, and she was able to be a home to my salt-n-pepper shaker family, among a couple other vintage knick-knacks! 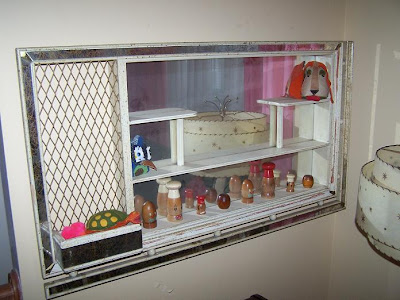 And here are two of my favorites! My beloved Toofil Lamp next to my Grundig hifi system! We call him Boris, and he still works great! He was a gift from my incredible friend Wendy, and I'll always treasure him! 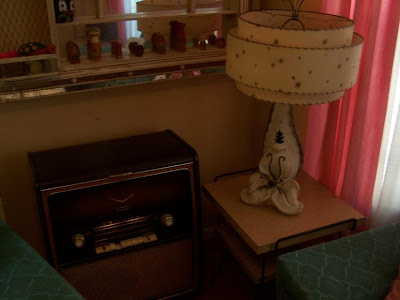 I got the Lane kidney-shaped coffee table below for a steal at $20! I recently saw one online that sold for something crazy like $700! $20 is more how I roll... I will admit though, one of the reasons he was $20 was that the lady who bought him before shattered the middle of the glass.. so I built a frame and covered him with fur! And no one knows any different... 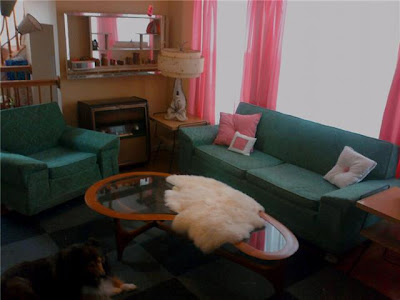 The pink curtains below are a bit distorted (it's more accurate in the above pic), but you get the idea. The curtains aren't technically done, but I just don't have time right now to sew a set of curtains...so I kind of just folded over the ends and grabbed a stapler! Shhh it's our secret! It'll get done the right way eventually, but I'd rather have something up there than nothing at all! 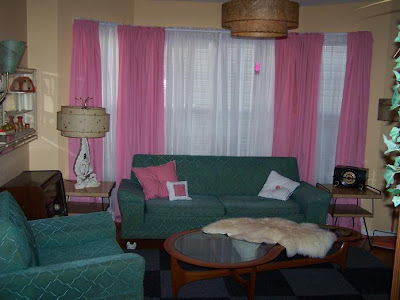 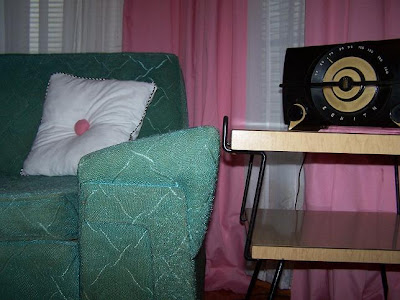 It totally came as a surprise how great the angles here all worked together! Thanks Mick for pointing that out before! Also note my awesome table radio- I got it in Montreal for $30, and it works great!!
And I love my coral pink floor-sweeper turned lamp below! It was a bit interesting figuring out how to do it, but was totally worth it in the end! 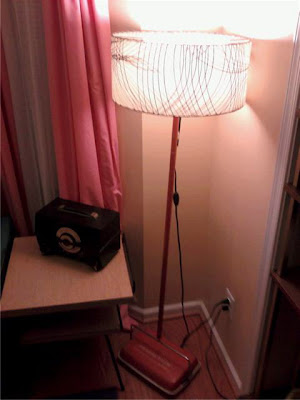 And my awesome vintage room divider I got for $80! I don't usually spend that much, but I just love the lines and built-in lights! And it will look so much better once the room behind it isn't a crazy eyesore! 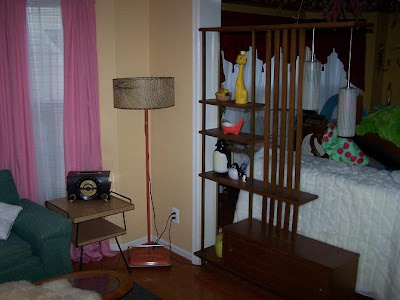 Below is looking opposite from the couch. For the record I'm thinking about painting this wall to act as an accent, but we'll see... Any color suggestions? The little cubby to the right is actually an enclosure I built out of a vintage bathroom thingy to hide the house temp. control. It started as something just to hide it but I really like it ha! I also LOVE my kitty clock that wags and blinks, and it's hard to see but the thing on the top left is a vintage toy rocket I recently scored for $3!! 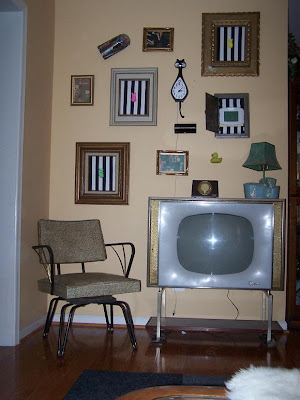 On top of the TV is my vintage Bunny lamp, which is just too cute...I picked it up in Montreal for $10 and it's so meee! 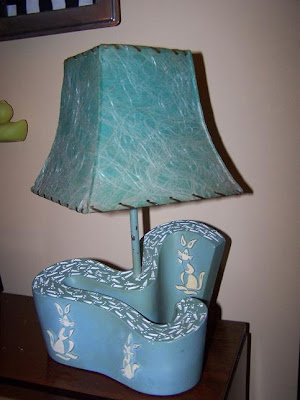 And the TV is pretty fantastic too... very sleek styling for a 59', and has one too-cool feature....
It lights up & glows! 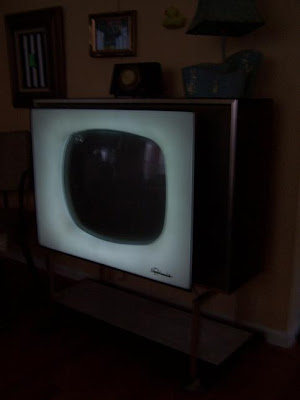 It's a rare model of the Sylvania "Halo-light" series, which was designed to not cause as much eye strain when watching! Here's the fantastic original ad! (love those stripes!) 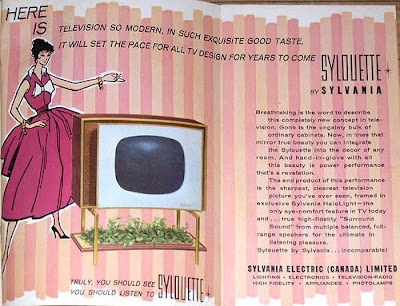 And finally, I've had the vintage fabric below for about a year but was thinking about using it for this room. I actually scored it for free in the form of 2 huge curtains, and knew I would use it someday! It has a lot of the pinks and greens in the room so I was thinking of maybe making a window box and covering it in this, and maybe pillows...we'll see! 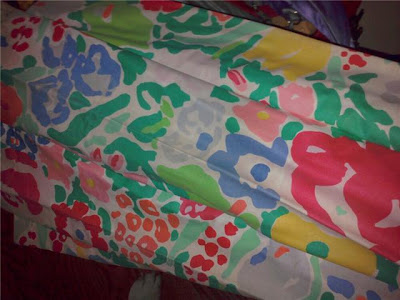 Anyways, hopefully the pics gave you an idea! The room is soo cozy and happy now! It's so great to have done now before I tackle the other rooms. Kinda gives the motivation to go on!
Anyways, enough babbling! What do you think??
-Nick :)
Edit: Oh, and so after thinking about it, I'm fairly sure I am going to build a 50's-inspired window box and cover it with that fabric...and I'm thinking a pillow or 2! I'm also thinking about painting the photo/TV wall a light shade of grey. Both things will carry a lot of the colors in the room higher, add an extra layer of visual interest, and just give it that extra touch/layer I'm trying to get. Grey can have a sort of sophistication effect (which I love with the carpet vs. curtains), so I think it would be interesting to have that wall be grey since it would give all these silly mismatched frames and things an unexpected edge...anyways, those projects will be for a future post!
Posted by Decades a Go-Go at 5:55 PM 19 comments:

Ok... it is now 5:13 in the afternoon...wait..I mean morning. This is how tired I am. I've been meaning to get the "after" photos of the sofa and chair up. And well, what started as wanting to have a decent place to take some photos, turned into an all evening-&-night-long project of assembling the living room (after moving everything there out, including a 900 lb player piano!). I was originally planning on painting the walls, but after moving all the furniture in I'm actually going to leave it as is (creme-ish) for now. Part of that is because I'm exhausted, but the other half is that it actually looks pretty good as is. With all the color between the furniture and curtains, the walls kinda need to take a backstage role, and it turns out the already-there creme color is doing that. I'm still thinking of either painting or putting up fabric on the TV wall to act as an accent, but we'll see...
Anyways, the whole reason for this post is to actually say I probably won't get around to posting about the whole shebang tomorrow...err...today until some time this evening or so...at least. Plus the camera doesn't like the whole photos-at-night-thing.
SO to make up for being a sporadic poster lately...here's a tiny sneak peak of the sofa and her new habitat! 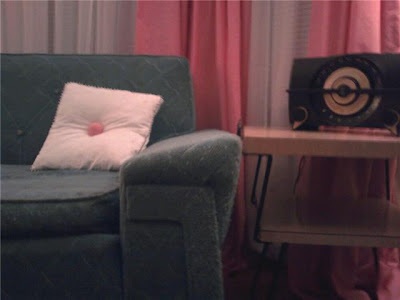 And in honor of vintage decorating with PINK, here's an awesome
excerpt from Funny Face that expresses my views on gorgeous
50's corally/salmony pinks quite well!
Posted by Decades a Go-Go at 2:13 AM 10 comments:

Well first off, I scored a sofa set!! It came out of the house of the original owners, where I also got lots of other goodies, but for now we'll focus on the sofa. I'd been looking for a good 50's sofa for a while in my price range, so when I saw this one only a couple of hours away I couldn't resist. After a little negotiating, I got both the sofa and chair for $50, which I thought was ok, knowing they would need to be cleaned. The upholstery was in fair condition, but they were teetering on that edge of I-don't-really-wanna-use-them-as-is, on the bad side. I finally bit the bullet and decided to hire a professional upholstery cleaner.
I guess I could have just rented a steam cleaner, and probably will in the future, but I just wanted it done the best it could be, and hiring somebody also had the advantage of being able to have it sanitized and disinfected.
He finally got here today, so here are a few before pictures....
Here they are, waiting in the driveway... 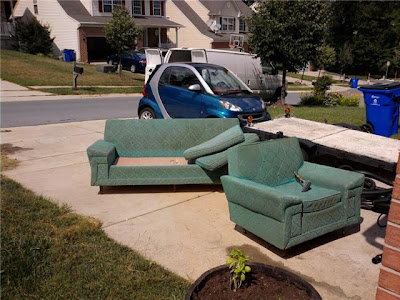 In the pic below you can see some of the worst dinginess... I don't mind fading so much, but stains and especially that dingy brownish coloring on the front is a bit questionable... 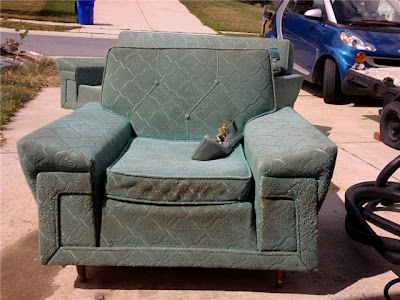 Here's the sofa in all her dirty glory! She can't help the fact that she's a dirty girl... 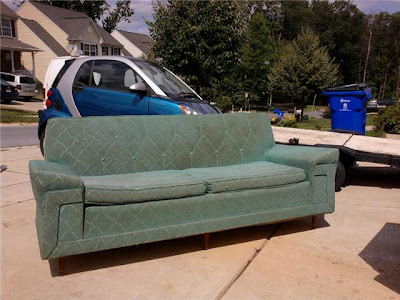 Below you can see the extent of the dingy...ness. I'm not sure what to call it. It's not so much a specific stain as it is general wear and dirt. 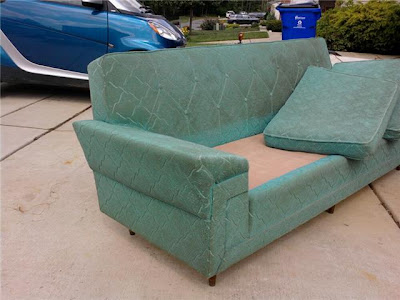 Well, it's done!!!! I'm afraid I'll have to torture you though, since I don't have any "after" photos yet. The sofa is still drying in the garage. I will say though, the difference is impressive! There's still some spots here and there, and it's not a miraculous rebirth, but as a whole it's wayy better. (No smells, and it's just mentally and visually cleaner and fresh...). The brownish stuff on the front of the armchair where the cushion is is completely gone, and the back of the sofa doesn't have that dirt line where the cushions meet, for example. Way better. But anyways...I'll get pictures up asap!
Oh, and how awesome are these endtables?! Also scored at the same place for $5...!! 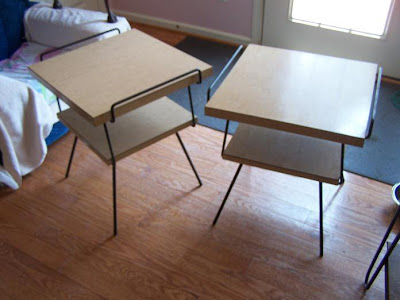